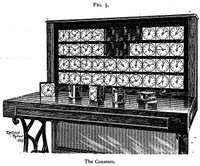 We'd like to update today, but our day job has us on a tedious task, tabulating results of a survey. Good thing our graduate degrees are in "Counting: Units and Measurement." We're getting quick with Excel, but we'd rather be writing. How do we escape from this misallocation of our skills? 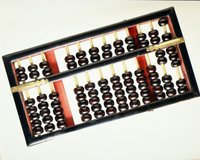 P.S. The graffiti event went down, for those who inquired. Mission complete.

Has anyone heard about this? Can you explain it? We don't understand. 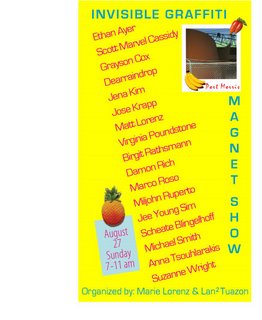 We are proud to showcase the work of 17 intrepid artists who have responded to a call for magnetic art and invisible graffiti. Invisible Graffiti is a secretive act in public space. It is an act of resistance against the architecture of behavioral and spatial control. Its possibility rests on mimicry and invisibility, copying both the style and strategy of its adversary.

On the Bronx waterfront at Port Morris is a rigging company and in the lot is a Richard Serra Torqued Ellipse. There are many others like it, in museums, and collections all over the world, but this one is in hiding, waiting. This large-scale sculpture has enclosed a space of possibility. Sculpture is a found site. The Invisible Graffiti Magnet Show will be installed on the Ellipse.

If questioned, maintain that you do not know who is in charge. Criminals are people who get caught. 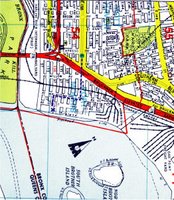 Driving Directions
Take 278 over the Triborough Bridge. Take Bruckner Expressway/ 128 E Exit 47 toward New Haven. Take Bruckner Blvd exit toward 138th. Stay straight on Bruckner Blvd. Left on 138 St. Right on Walnut. Left on 134 St. Park your car a few blocks from where 134th dead-ends at a fence.
Subway + Walking Directions
Take Bronx 6 Train to Cypress Ave and 138th St
Walk on 3 Blocks on 138 St, passing Jackson Ave, the Bruckner overpass and Willow Ave. Take a Right on Walnut. Take a Left on 134 St, after Locust Ave, 134 Street turns into a parking lot. There is a storage building on your left, walk quietly toward the left hand corner of the fence. 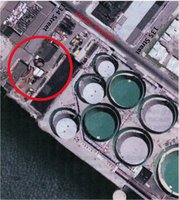 THEN: When you get to the fence at the end of 134th you will see the sculpture to your left just past a low fence. Use the wood block, climb over the fence and walk inside the Torqued Ellipse.
Precautions: Make sure we have your cell phone number before August 27. We will text message you if there are any changes in the plan.
Please be careful and keep a low profile while walking to the site.

We also want to thank Art Fag City for the generous shout-out last week, for our post about Jason Rhoades. Thank you, AFC! You rock.

We remember seeing "Chalmette Battlefield, Louisiana 1976" at Marianne Boesky, in a group show about 1970s color photography. We agreed that it was riveting and it is still one of our all-time favorites. 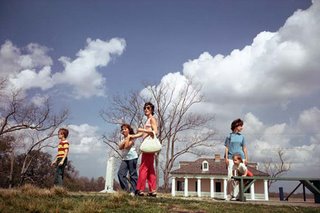 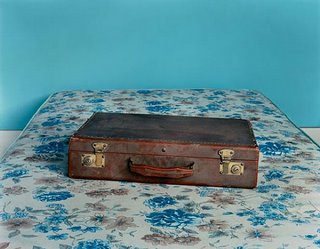 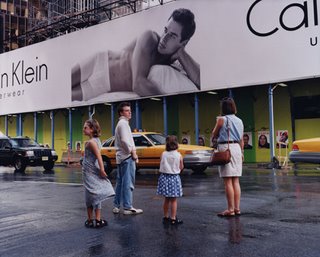 In our Chelsea crawl, James J Williams III caught our eyes at Envoy Gallery, a rising favorite on our list, for its optimistic program of cool, emerging artists. James' installation of drawings, paintings, furniture, photos, clothing, and bric-a-brac largely suggests an art practice based on living life: dating girls, collecting objects, drinking Scotch, and potentially harming his feet by wearing worn out shoes.

Then again, James makes drawings, paintings, and photos, which seems like evidence of a "trying" to make art (rather than just living it). Plus, his list of artists suggests an elevation of the artist above other people. 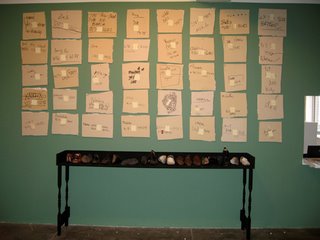 But then again, the casual execution of the work - spontaneous, shoegazer, scrappy - proves that James makes little departure - no trip from life into art. And by mingling his pictures with his belongings in a somewhat nonhierarchical manner, it seems a level playing field. 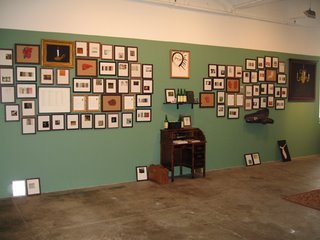 James seems a sensitive, dandied, and eccentric young man. But he's still a young man. In a twist on Jack Pierson's "Goodbye Yellow Brick Road, Part II," itself a twist on Carl Andre, James covers a wall with names and phone numbers of women; we assume these were trysts and one night stands. Couple this with the Scotch and, were he older, he might seem like a drunken womanizer. But his diminutive drawings and general aesthetic of a shrug, rather than a grand gesture, keeps him charming. 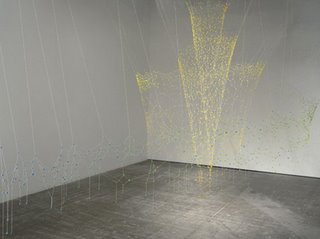 We’ve been on vacation and away from our computers, so it’s a real treat to blog a new entry. Yesterday, we finally caught the Dada show – Paris and Cologne – saving Berlin, Zurich, and Hannover for Wednesday. We also caught Douglas Gordon’s videos, and reminisced about the day we saw his “Real Time” video, with the elephants, at Gagosian. This was our first Chelsea experience. We were stumped.

After MoMA, we dodged tourists on Fifth Ave, heading up to Marian Goodman, where the promise of Richard Tuttle and Eva Hesse beckoned us in "Freeing the Line," curated by Catherine De Zegher - who else? (Neither of them blew us away here, after seeing the great EH shows at Jewish Museum and Drawing Center.) Precedents to this show seem to be Richard Tuttle and Niels Bohr.

But Ranjani Shettar’s “Vasanta” was a real treat: a color field drawing in space, a matrix that twists into a vortex, its integral wax beads slowly shifting in their airy web from blue to yellow. A sign warned us not to enter the sculpture, but we did, anyway. Just for a second.

We also dug Joelle Turlinckx “Volume of Air” sculptures, variations on a cube-shaped frame supporting wood shafts, plastic strips and other thin, light materials. The sculptures incorporate pedestal, sculpture, and content into one simple assemblage. Reminded us of B. Wurtz, showing at Feature Gallery this month. To sculpt air also reminded us Duchamp’s “50 cc of Paris Air” in the Dada show. 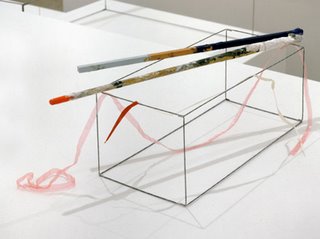 Finally, 8.6 km, about 4.5 miles, of masking tape, black and white were enough for Monika Gryzamala’s awesome installation, stretching across a window, along the wall, choppily transforming from white to black, and then forking simultaneously around the wall and also around a support column. 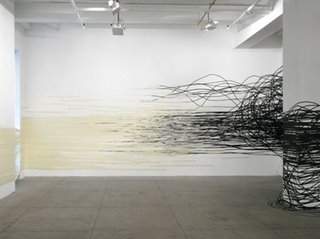 Inspired, we used tape today to conceal the seams between our new air conditioner and the walls around it. 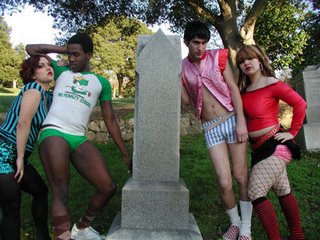 These are the members of Gravy Train!!!! Who rocked Knitting Factory last night with high camp hijinx and talking dirty. The group's instruments include a keyboard set to "Hammond Organ," a guitar, and a single cymbal. The sound and style owe a lot to the B-52s, although GT!!!! bring a lot more g-string braggadocio.

We were surprised by the mosh pit, expecting more of a dance-happy crowd, but dove in nonetheless, and found ourselves covered in sweat within a minute. 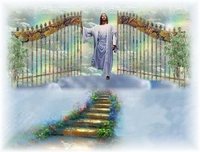 JR: I'm Jason Rhoades! Whoo-hoo, what a ride! Look at the view from up here! Hey, where is the scaffolding to support this place?

JR: Sounds great! So where do I sign in?

SP: Jason, heavenly souls must be accepted. What are your qualifications?

JR: I've shown installations in some of the best galleries, kunsthalles, and museums worldwide; exhibited in the Venice Biennale and the Whitney; and I've even collaborated with Paul McCarthy.

SP: Yes, but why should we let you into heaven? What good deeds have you accomplished?

JR: Well, I contributed to art a simultaneous celebration and deconstruction of masculinity. I examined American consumerism, exposing our material excesses and messy, crowded, decentralized ideals and lack thereof. Formally, I encompassed the last 50 years of art, invigorating a legacy dating back to Duchamp.

SP: I've heard from the others about your "meccatuna." Why such irreverence? Is this colonialism, or at least insulting to Islam? And the profane colloquialisms for the female reproductive organ - misogyny?

JR: No, no! Of course, tuna is a joke about vaginas, but it's also a joke at the expense of masculinity. You know, as if men have one-track minds. Think of the legos involved - boys' toys. The entire installation drips with machismo - the machines, cords, tools, hot and noisy atmosphere...

SP: Why challenge masculinity? Shouldn't men retain their dominance over the lesser sex?

JR: No, that's a dated ideal, Pete. But I just use machismo as a vernacular, and an entry into American cultural criticism. I act out the American and take on the American. You know, like Richard Prince's Marlboro Man photos.

SP: Right, right...we keep forgetting about that. 2000 years of patriarchy make for a habit hard to shake. Okay, but why can't you just make a simple sculpture? Rodin brought some wonderful sculptures...

JR: Yeah, but a scattered - decentralized - installation is more contemporary, reflecting how our monolithic beliefs have been shaken, and how a pluralistic culture has flooded the vacated space. You can link this to Thomas Hirschhorn, Jon Kessler, Robert Morris, Eva Hesse, Duchamp...

Plus, to fill a space is more phallic. It's like "clogging" a void - filling a hole.

SP: (nervous chuckle) Okay, Jason. It's sounds as if you accomplished a lot. And in such a brief period of time! I suppose the art world - though filled with heathens and greedy wastrels - will miss you. Sorry for the grilling, but some of you artists can be very recalcitrant. But you can enter heaven. Enter here. 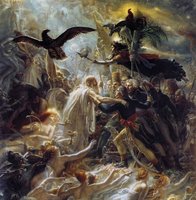 The TD crew took the time to see Lawrence Rinder read from his new book and answer questions from Bill Arning, AA Bronson, Andrea Fraser, and the audience. We noticed his favorable mention of the late Kiki Gallery: he said it inspired hope. We had only heard of it previously from Keith Mayerson, who showed his UC Irvine thesis project, "Pinocchio the Big Fag," at the space. If the Kiki people had the foresight to show Keith, and if Lawrence Rinder liked it so much, then we should look into it. 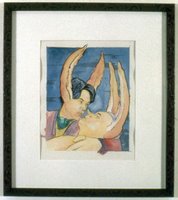 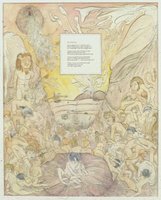 According to this site and this other site, Kiki Gallery was a small gallery located in San Francisco’s Mission District. It was a provocative, intelligent presence in the Bay Area art community from 1993 to 1995. Kiki’s founder and director, Rick Jacobsen, shaped a lively program of exhibitions, readings, and performances by emerging artists. The conﬂuence of innovative art, gay culture, and performance that was distinctive to Kiki had its antecedents in the mid-1950s projects of King Ubu Gallery and Six Gallery. (In these pioneering artist-run spaces, Jack Spicer, Robert Duncan, Jess, Wally Hedrick, Jay De Feo, Allen Ginsberg, and others presented and supported one another’s work. The same creative energies efﬂoresced in the theatre of the Cockettes, in the conceptual art and performance movement of the 1970s, and in the rich history of alternative art spaces in the Bay Area. These energies had a brilliant, though brief, ﬂowering at Kiki.) The gallery became highly regarded for its director’s imagination and fearlessness in presenting challenging new work.

Top of Page: Keith Mayerson, "Lampwick and Pinocchio" and "Island of Boys," 1993 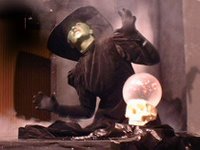 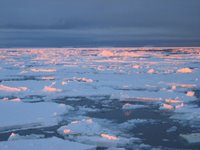 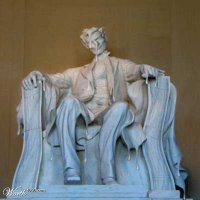