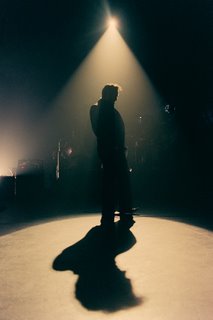 Ostensibly, Ryan McGinley's new photos at TEAM Gallery are about Morrissey. But they are also about Elvis or Axl Rose or Michael Jackson – or any rock star with an international following numbering into the hundreds of thousands. But they aren’t actually about rock idols.

These photos are really about idol worship. They capture the rapture of a messiah onstage, wooing and rallying the fervent masses, while seeming to connect with each individual, who internally affirms, “I know it; he’s singing to me…”

The devoted fans depicted in Irregular Regulars have memorized the lyrics, heard the B-sides, and charted the collaborations: “Yeah, and then Johnny Marr formed ‘Electronic’…” So the performance for them is a transfiguring, intimate interaction with their idol and a unique, irreplaceable tab in the history of their performer - and maybe even music in general. More importantly, however, it’s a visceral whirlwind that sweeps them into a serotonin flood of musical catharsis. We see the fans’ hands reach into the air, pawing for contact, receiving good vibes and sending them back as blessings.

In fact, the fans appear so moved that these photos could be from an evangelikkkal youth revival: in the Astrodome, with an impassioned minister preaching the words of our Lord and Savior.

It just proves that being uplifted is a content-free process. Some find salvation in the lyrics of Morrissey, some in the verses of Matthew. McGinley wisely acknowledges this and universalizes his images by skirting subcultural contingencies – dress, ornamentation – and focusing on facial expressions and body language. Likewise, Morrissey’s face doesn’t really appear, except in “Morrissey 1,” where we see only his shadowy visage – and also McGinley’s own face. By restricting the specificity of both the performer and his audience, McGinley allows everyone in to share in the joy.

Given that, the strongest photo in this show is “Morrissey 16,” where a pale fog encloses the enraptured fans, a misty pictorial stand-in for the blissful emotional buzz of crying, “And if a double decker bus, crashes into us…” (Or, “Hallelujah!”) 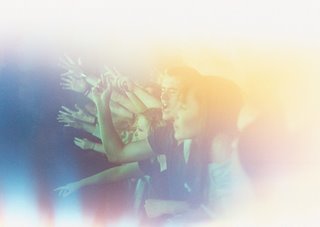 This is also the most colorful photo, with an aurora of violet and blue countered by a gold nebula among the heads of the fans. Most of the others feature one or two colors, as lusciously as a Rothko. In “Morrissey 17,” Morrissey himself – or his silhouette – is a black tower lit from above in white gold. “Morrissey 11” is the cleverest entry here, with a stern looking lad in strawberry red – it could be the cover to a Smiths album.

Lads prevail, despite the occasional angelic nymph, and we remember that McGinley rose to fame by documenting gay lovers and friends, even offering a new genre of “Sexy Boy” against the reigning Chelsea boy movement. His boys were skinny, wide-eyed, wasted, scarred, and unibrowed.

Formally, McGinley is in the same grainy-film processing that we saw in his 2004 show at P.S. 1. That goes with the snapshot aesthetic he continues, which is perfect for candid documentation, to which he seems equally committed. Although his underwater athlete portfolio brims over with tantalizing shades of blue, the manic, artificial, saturated colors here seem new to his oeuvre - although overstimulation does not.

Comments:
this review sounds like an xtra credit book report you NERRDDSSSSS

how does that work with the idea of being "Warhols Child"