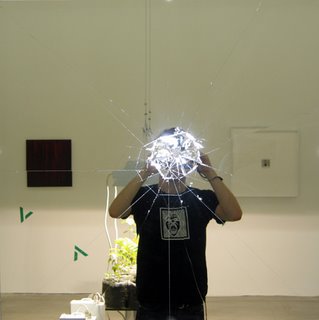 “Hello Sunday” is an intimate group show curated by figurative artist Holly Coulis. The show examines “an ease regarding process,” and a casual, but romantic sensibility in painting. Emerging artists, such as Benjamin Butler and Maureen Cavanaugh, are included, as are mid-career artists, including Brad Kahlhamer and David Humphrey.

Most exciting in this show is Keith Mayerson, who advances another alpha male in his series of male heroes. This time it’s America’s favorite perpetual youth, Charlie Brown. Charlie Brown wields his baseball bat, hopeful for a hit, yet doomed to Sisyphian failure by strike-out. Snoopy looks on, but with his back turned to our hero, perhaps to turn his head on the third strike.

The palette of wheat grass, brick red, and split pea soup thrives in the flat color fields, modeled only in key places, such as Charlie Brown’s famous yellow shirt. Colors are repeated from place to place, and shapes are delineated in blue blends and purples. The approaching baseball is rendered in soupy, swirling brushwork pushing in and pulling out the silky paint. Elsewhere in the painting, Mayerson employs insistent, short strokes within the flat fields, and one thinks of a Van Gogh sky or field. Mayerson also incorporates text, with the “Peanuts” logo and more. Clean-cut letters a la Ruscha or Baldessari find no place in a Mayerson painting; instead, we see painterly, irregular type. Some letters – and entire words – are scrubbed out during the painting process and not replaced, indicating that they are secondary to Mayerson’s process of impulse and expression – he won’t go back to “fix” something.

Mayerson employs Appropriation, using as his source popular icons and imagery: rock stars, actors, and cartoon characters. However, he eschews the hard-edged, geometric forms of the Pop idiom (Lichtenstein, Warhol, Koons) for messy, gestural, expressive forms and paint application. He also seems to discard the irony of Pop, as his paintings ooze with tactile appeal, sincerity, and warmth.

In “Barbara and David Stone’s Bookshelf,” Dylan Stone examines inspiration and the anxiety of influence. 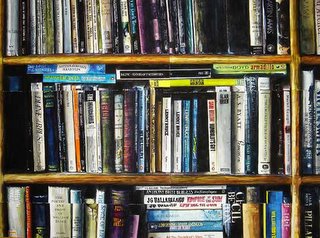 Stone assembles 38 watercolor drawings into a large-scale picture of his parents’ bookshelf, which is filled with great works of literature and philosophy. Each sheet is rendered with great loyalty to the appearance of the books, specific to publisher and edition. The spines are weathered and cracked, proving that they have been read multiple times. Atop the shelves are African and Pacific figurative sculptures, suggesting a familiarity with art history. The impression we get is that Barbara and David Stone are highly literate, cultured, and erudite; with a genuine appreciation for art and literature. To be reared by such intellectual people must be inspiring, yet intimidating; and that is Dylan Stone’s point.

“Barbara and David Stone’s Bookshelf” is autobiographical. Stone uses 38 sheets of paper for the massive drawing. The artist is 38 years old, a 1:1 ratio of sheets to years of his life, like “building blocks” in his intellectual growth. Stone develops this idea of building blocks in the configuration of the bookshelf, as the rows of books and varied heights of the moveable shelves correspond to the shape of the Periodic Table. It’s as if each book is an element in the Stone family’s cultural outlook.

This indexical effort fits into Dylan Stone’s previous projects, especially "A Trip Along the Yangtze River,” in which the artist photographically documented every block of Manhattan. In “Yangtze River,” the project is steered by urban planning rather than the artist’s habits, whims, or training. In “Bookshelf,” the strategy is similar, except that one could substitute a domestic fixture for metropolitan grid, and a couple of parents for a team of urban planners.