What’s black and white and brown all over? Or orange? Or with bird, airplane, and gentle giant imagery? Bendix Harms is, and it’s the Hamburg painter’s first solo exhibition in New 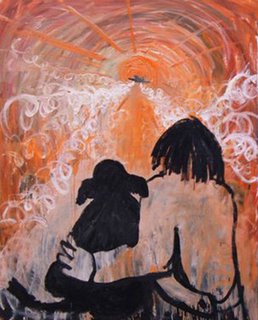 Invoking 1970s Guston and late Picasso, Bendix Harms slathers on the paint, depicting an apparently middle-aged man gazing at birds, admiring airplanes, and unveiling his six breasts. Each canvas hosts just one or two hues with black and white. The suite of about a dozen paintings is installed densely, which is successful: it suggests a prolific practice.

The protagonist in each image discovers a bird’s eggs in a nest, tenderly weeps over a dead bird’s body, eagerly boards an airplane, sleeps in a Volkswagen under a family of owls, and bathes at a spa. Bendix Harms presents his hero in a clumsy, chunky style; painted with an untutored style that approaches what Modernists called “primitivism” or at least "naive." His eyes are sad and lonely, his hair parted on the side, like a boy, and his hands and feet blocklike and blunt. He is a tree-hugging Id stumbling around the woods; or an embodiment of a hearty appetite for nature, companionship, and the dazzle of technological innovation. One thinks of the philosopher Rousseau and of Tarzan. Yet of the jungle he is not: our hero combs his hair, drives a car, and bathes - so he's civilized.

Although Harms is German, his narrative of a loner in nature connects him to Dana Schutz, and Frank, her “Last Man on Earth.” His restrcited palette reminds us of icy Tuymans, but Harms is too warm and hearty- figurative Guston is his kindred spirit. Both painters share the interest in an introspective investigation of man’s place in society (or antisociety).

After absorbing the refreshing briskness of Harms’ sincere and romantic revelations that “man is naturally good” – compare to Thomas Hirschhorn’s bloodbath a few blocks north – be sure to inquire about the drawings in the back. They are more delicate, but just as delightful.