The T.D. crew caught a glimpse of the Munch opening

The show opens with "The Dance of Life." You'll also see some early oils on canvas and cardboard, including a chilling early self-portrait. A version of "Vampire" hangs nearby, different than that at the Met. The famous "Madonna" is on the same wall. (If you omit the woman's head, then it looks phallic - see illus. at right.) Several takes on "The Kiss" are grouped together and there's a version of "By the Deathbed." A print of "Puberty" is there, but not the painting, and "The Scream" is tied up in someone's basement.

Later in the show, we drooled over a giant triptych of men on the beach, elements of which reminded us of Cezanne's "The Bather." The colors are daring and he uses these

insistent, parallel brushstrokes, almost like a weaving pattern. The 2 panels come from different collections, so the frames are mismatched. There's also a giant drawing of Nietzsche - did you know Munch was a Nietzsche reader? Me neither. I would have guessed Schopenhauer.

Finally, we stumbled into the smoldering "Self-portrait with a Burning Cigarette." It's chilling and magnetic, unlike some of Beckmann's self-portraits, in which he looks like a manicured dandy compared to the corpse-like Munch. Munch began in that dark, tormented place and returned to it later in his career. There's a "setpoint theory" of Munch's sensibility. Even if he could evade his demons for a while, it wouldn't last, and he would always return to them. 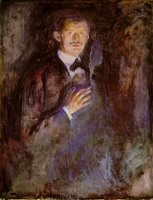 Comments:
Note, it's actually pronounced like this: Edvart Mungk. Not like "bunch" or "moonk." It's more like "foot" or "put." I found this on bartleby dot com.