Ain't broke; why Fisk it? 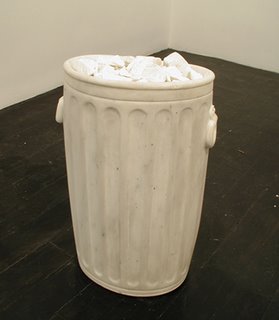 One can imagine that the rubble pieces are the excess cut-aways - remnants of the process - now reincorporated into the piece. The piece could also be called "Recycle bin." It's much like Brancusi's sculptures, in which the rugged pedestal is part of the polished sculpture - physically inseparable.

There's also a Duchampian humor to the piece. Just as Duchamp selected a mundane object for his "Fountain," Fisk similarly chooses a banal item, which we usually ignore or deny, except when we need it. But to use the marble to present the trash can AND the trash is a kind of transfiguration - changing water into wine.

"Trashcan" has a dent in the side, so it leans to one side. This connects it to Renaissance marble figurative sculptures, in which the subject stands contrapposto. "Trashcan" also leans, shifting its weight, putting its best foot forward.