Aristocrats enter a checkerboard-floored ballroom and prepare to dance. G-men in black suits and shades, a la "Men in Black" or "The Matrix" rush in, guns blazing and a mutual massacre ensues in this scene worthy of Tarantino.

A bourgeoisie girl enjoys afternoon tea, only to be interrupted by a visiting jungle boy out tree-climbing. He teases her, she taunts him, and they begin to fight over the girl's plate of lemon cake. She debriefs him and pokes his penis with a stick, until the housemaid clears things up.

A tiger licks a bather's bottom till she is wooed to bed.

A Black duke cavorts with three mistresses in bed, then eats a banana. 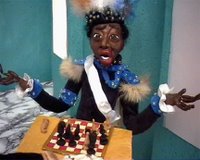 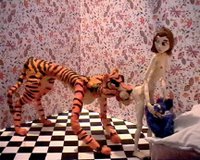 Hans Berg composes the "score" to each video. It's like Danny Elfman meets Atari; the music is delicate and emotive, yet whimsical and absurd. Djurberg lights her scenes in naturalistic ways, and edits in a dynamic way, keeping in mind the cinematic aspects of her product. 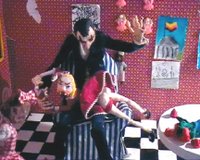 Djurberg's women have big, frizzy hair and pouty, swollen lips. Her men have huge noses (a device common among European cartoonists and illustrators)and troubled expressions. All have the wide eyes and clumsy movement we see in "South Park," but not "The Simpsons." In this clay world, tears, snot, and blood are the same substance as skin and hair - and the word balloons that take a few seconds to unfold. This use of material - rather than just illusion - places Djurberg in the overlooked medium of stop-motion animation, which is sculpture as much as it is video.