Triple Diesel tries hard to avoid "absolute" responses. No art is utterly hopeless and bad, and no art is unspeakably triumphant and great. 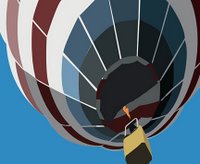 So here are some things we liked about Brian Alfred's paintings at Mary Boone Chelsea:
1.)Internal Scale: it's exciting to see how composition can add monumentality to a painting, even in the face of modest subject matter.
2.)Commitment: Alfred is unwavering in his commitment to clean, sterile spaces and surfaces in his razor-sharp city- and landscapes. Why? Dunno, but "commitment" is a content-free attribute.
3.) Titles: despite the impersonal paint application, Alfred selects heartfelt titles that reveal wonder and surprise: "The Saddest Day of My Youth" and "The Most Beautiful Night I Can Remember."

On the other hand, terms like "beautiful" - especially in a title - betray a conservative view of aesthetics and possibly philistinism. What is really beautiful? Daisies? Elizabeth Hurley? It's an underdefined term that nobody - especially an artist - should use it, except as a shorthand in persiflage. Anyway, a night sky is more "sublime" than "beautiful."

Brian Alfred's paintings explore the same things as American Modernism and Regionalism: the post-industrial city, dynamic cityscapes, and technological progress. We can think of Benton's "America Today" murals, Sheeler's precisonist pictures, or Demuth's, and even Stuart Davis abstractions. But someone like Sheeler was able to cultivate that clean control and order without stifling the image. His precisionist interiors and exteriors are still murky and mysterious, smelling of soot. The Ford Motors Plant photo series elaborated this ability. Stuart Davis' geometric abstractions never suffer the suffocating sterility of these Alfred paintings. The Davis' are lively jazz pieces, buzzing with vitality. 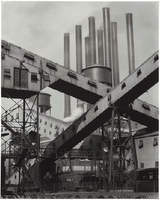 Brian Alfred's contemporaries include Benjamin Edwards and Kevin Zucker. The polygon and perspective zones of Edwards are dazzlingly complex. And Zucker's analytic, ascetic mixed media interiors and furniture pieces tune in to architecture more astutely, as well as challenging the conventions of painting. How about Kristin Baker's Nascar crashes, where acrylic patches slip over each other and only suggest the larger picture, like through a prism? We could even consider Lane Twitchell, who implodes city-inspired images into kaleidoscopic, multi-layered, labor-intensive collages that look like butterflies, tribal tattoos, doilies, gazebos, veils, and the sun, all processed through a blender and fractal transmogrifier. 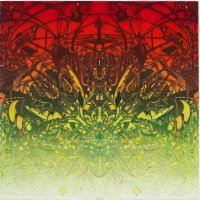 But Brian Alfred just settles for programmatic application of his acrylic colors and large scale. That's why we struggle to avoid our least favorite adjective - "boring" - and hurry on to another show. These paintings can go in a bank lobby.

Comments:
This comment has been removed by a blog administrator.

yah, but what about his animation projects? did you see at mary boone?

"'Commitment' is a content-free attribute." A truer word was never blogged. With exception, maybe, of beauty being an "underdefined term that nobody - especially an artist - should use."

The only time I say beauty is when talking to an artist friend and feeling unable to tell them their work fell flat or failed to inspire me with something. Namely thought. I always find myself saying: "How beautiful! And what an ambitious use of structure."

"ambitious use of structure" god you probably mean me. No just kidding, in my defense however I'd like to say I am just making this sh** up and make no claims to have any solid idea as to what I'm doing. But it seems to be getting better, the ideas are solidifing and I'm starting to understand it.

I like your point about the trickiness of the word "beauty" but would add that beauty and "the beautiful" are two different things.

For me, beauty is a term signifiying response, any response to some object or "situation" and I don't particularly mean thought, at least in that moment of apprehension.

Beauty is the respose illicited by something, and it lasts about as long as the smell of an orange while being peeled.

But this is just early morning drivel. Brian Alfred is boring and his work does indeed belong in a bank and how perfect because that's what Mary Boone runs.

Thanks, third eye. Yes, "beautiful" is a handy default adjective to use. I guess it's like describing a blind date as having "a nice personality."

I agree, Lane. "Beauty" is more in the viewer than in the viewed. And "beautiful" is something to ascribe to the object/situation, except that one has to sense beauty, first. So you can't escape that subjective, orange peel problem. I just think we should impose a moratorium on the word and have fun trying to find other ways to describe art.

Yeah poor Dave Hickey, God I love his writing but as Ken Johnson noted somewhere in the last couple of years "Beauty" did NOT turn out to be the "issue of the 90's"

However Dave has 500k in the bank from the McArthur's and alas poor Ken probably never will ; -^ {

oh yeah I didn't mean to dis Ken. I like his writing well enough and he's said some things that have meant something to me. But ol' Dave knows how to wrangle up a crowd and "win"

Did you see the website for the show? spaceistheplace.org?
Did you notice that the images are from protest rallies, area 51, the challenger explosion? Did you notice the refrences to Sun Ra and escapism? A civil war ballon devised to spy on enemies? Is there an interpretaion besides just that they are flat? What makes a flat painting less "personal" than a thick goopy painting? Sometimes things in our world seem beautiful only to reveal a disturbing and troubling underbody. But then, it takes a bit more investigation into images to realize that.

Thank you for noting that Web site. It's fascinating. Although it appeared on the press release, it was practically a footnote, so we missed it.

Now we know that Brian Alfred's paintings owe their significance to historically meaningful events and places. These references are compelling, but we wonder if the paintings have as much intrinsic value as the things they depict. They don't feel self-sufficient.

It's like making a bland painting of Lenin, and then expecting a good response just because it's Lenin.

In any case, it would be cool to do a show of photo-derived paintings of historical/political events: Brian Alfred, Luc Tuymans, Gerhard Richter, and maybe Damien Hirst (but in a different room).