The TD crew attended audio-visual presentations at the Guggenheim last night by Hugo Boss Prize nominees Damian Ortega and Aida Ruilova. 2006 marks the tenth year since the inception in 1996 of the biennial award.

We knew Aida Ruilova pretty well from her 5-monitor installation at the 2004 Whitney Biennial, Greater NY, a show at Greenberg Van Doren, and drawings in places like Scott Hug's K48 magazine. But she's been in major shows all over the world - even the Venice Biennale and current Berlin Biennial. We didn't see Julian LaVerdiere - are they still boyfriend and girlfriend?

Aida isn't much of a public speaker, but her videos are riveting. Throughout her oeuvre, percussive and rhythmic sound adds as much structure to the videos as the editing, even essential in some videos, like the inhaling exhaling waves in "Untitled." Gasps and ejaculations repeat until they become beats, turning the videos into aural fugues. Her new video - the longest so far - honors her mentor Jean Rollin, a French director of horror/vampire films: Rollin, Ruilova's Rosetta. In this video, Rollin plays dead on a bed while a young woman mourns him. She mounts him and unzips his pants, suggesting fellatio and necrophilia. It's Elektra complex and the anxiety of influence, via the macabre. Interspersed through this narrative are shots of cemeteries, castles, and a scholar's library, along with creepy dead girls. In this video, Ruilova indulges more in the vampire imagery she had earlier evaded. That evasion validated her horror aesthetic, by shaking the genre stereotypes. Here, we suppose it's okay, since she's doing an homage to Rollin.

Damian Ortega, new to us, really knocked our calcetines off. His presentation began with "Tired Pickaxe," a sculpture of an axe bent along the handle. The pickaxe lays on the sidewalk, yet isn't prostrate - it curves up, as if struggling to get up, or maybe resigning after a long day. We thought of that bent streetlamp done by Martin Kippenberger.

This surrealist, sculptural strategy surfaces again in the series of Coca-Cola bottles blown to imitate female figures. Other work was more rule-based and Minimalist. 50 numbered cinderblocks were stacked in a grid. Onto this wall, he painted an auto battery bearing the name "America." Then he reordered the grid in varied directions, which caused the battery image to become reconfigured. And then in other projects, he examines how function separates an object from a sculpture "Obelisk on Wheels" is a moving - so unreliable - landmark. "Cosmic Thing" disassembles and then suspends the components of a Volkswagen Beetle, an apotheosis from mundane vehicle to sculptural spectacle.

Still convinced about "the expanded field," we appreciate how Ortega's sculptures merge with architecture and wonder if Ruilova's efforts in film and music suggest an analogous "expanded field" for video. 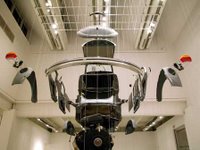 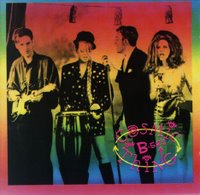 Comments:
Yeah expanded all the way over to MTV. And I mean that in a good way.