We finally saw Eva Hesse's work in person. We had seen plenty in slide lectures, web photos, and magazines, and always admired it. This show also led us for the first time to the Jewish Museum.

Accretion looked great in the space. A slight reveal between the wall and floor creates a thin black line behind the fiberglass tubes, helping to emphasize their silhouettes and the voids between them.

Sans II stretches across the long wall, five modules cast in fiberglass and resin. As each of the modules is in a different collection - two at the Whitney - they deteriorate at varying rates. On the wall, we can see the color change through the series, like East Coast pallor to Mediterranean tan. Evidence of her studies with Josef Albers? We can also see the surfaces weathering, becoming flaky and reptilian.

The turds/meatballs on the grid of Schema reveal a truth about EH. She occupies The Grid - geometric, orderly, rational - and subverts it with all-too-human imperfections - unusual forms, secondary and tertiary colors, and messy textures. 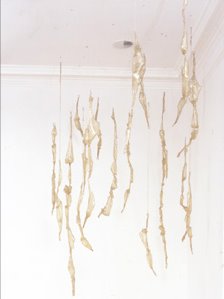 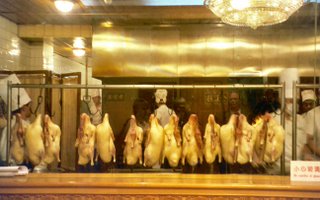 We struggled with the wall label for Contingent. EH said, "I wanted to get to an art non connective, non anthropomorphic, non geometric, non, nothing, everything." How can she deny the anthropomorphic content of this piece? The color connotes flesh, as does the texture - as it is in most of her work at this show. In Connection, the individual components hang like Peking Ducks in Chinatown. This piece also makes special use of gravity in its construction, as the fiberglass relies on dripping for its formation. It's a record of its own construction, something we rarely find in sculpture, but often in painting.

Creating something that records its own progress and records gravity brings Hesse into painting, face-to-face with Pollock. Everyone knows the connection betweenUntitled (Rope Piece) and a Pollock drip painting. We can review how they use space: Pollock announces himself in space by his mural-size scale. Hesse infiltrates three dimensions - four if you count light. The ropes connect one wall to its perpendicular neighbor, and then to the floor, which they reach down to kiss. Shadows cast all over, creating a one-dimensional doppelganger of the sculpture. Individual ropes defy gravity, others bend to it, and the entire structure seems to float. Or explode. The ropes reach above the viewer and beneath the viewer, like a giant spiderweb lunging forward. 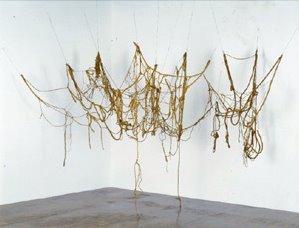 Comments:
So Peter Scheldahl once wrote that the three most important post-minimalist sculptors are Hesse, Nauman and Serra. Interesting.

He also once wrote that the four most influential post-war American artists are Judd, Warhol, Ruscha and Nauman.

Serra's show at Gogo's is amazing.

So then the sweet tragedy that is Eva Hesse. We'll never know what she might have done.

This is cheesy, but I like the romance of the great artist consumed by the work that made her great.

One friend joked about the yuppie couple perching their poodle atop a Serra sculpture, then shooting photos. Making Christmas cards?

I really dug the massive pieces against the parallel walls, even penetrating the walls at their ends. And the six cubes rotated were great.