Pierre et Gilles, Gilbert & George, and now... Donnie & Travis. The Williamsburg-based couple got their bearings by printing for Ryan McGinley and styling performers such as Fischerspooner. Now, they transform their talent into a fine art practice.

The artists photograph their friends, mostly queer, and then print the photos on silk, using a cyanotype process. They embellish the image with embroidery and then design a space around the figure with washes of textile dye, producing a foggy, murky space that feels substantial and claustrophobic around the featherweight, ghostlike figures. Most figures are alone, but some interact in ambiguous activities with mates. 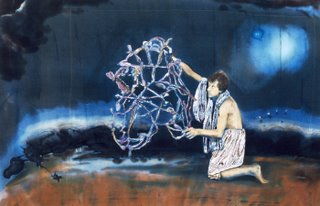 Donnie & Travis argue that these are not paintings, because a) no paint is used, b) the process is more textile than painterly, and c) you can wash the piece you collect. (We're unsure how many collectors wash their collections, but okay.) Of course, painting has encompassed so many variations in pigment vehicles: watercolor, oil, acrylic, enamel, wax, and tempera - not to mention urine, feces, and blood. D&T seem to have a narrow definition of "paint," which can be an obstacle. Moreover, they stretch the silk like canvas, and exhibit and distribute the work in a tradition occupied by painting.

Andy Warhol began portraits with a print and then applied pigment. However, his portraits are monumental faces in abstract, high key spaces. D&T are different because their subjects are people and not just identities, and because the environments around them are more like tangible landscapes, even if unspecific. Moreover, the mood in their scenes brings them closer to the decadent dreaminess of someone like Hernan Bas. 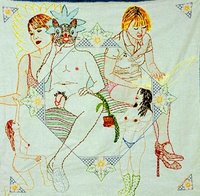 Among other embroidery artists, Michael Raedecker achieves a more acute sensitivity and technical aptitude and Ghada Amer makes a stronger assertion about sexuality. Orly Cogan is playfully perverse and more flexible with materials. However, D&T seem to be on an upward wave. They recently completed a High Desert Test Site project, and are preparing a group show of textile-based work to follow their own debut show.

Erase Errata hadn't played NYC in three years. What were they up to? We're guessing it was rehearsal, because they rocked our socks off. 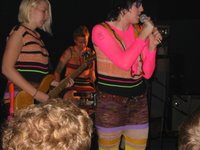 We dropped by I-20 last night for the opening of "Men," organized by Ellen Altfest. All night, people joked, "Have you seen Ellen Altfest's Penis?" 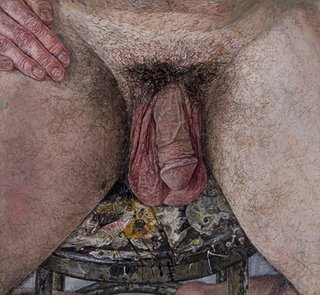 The discipline-specific show, featuring paintings by women of men, covers a range of representational painting. Chie Fueki's "Super" depicts a bodybuilding strong man, shimmering in a matrix of glitter, colored paper, and acrylic pixels. Ellen Altfest's "Penis" is an intricately detailed, indexical, naturalistic examination of a fellow painter's twignberries. Another anatomical detail, more vestigial perhaps than the essential organ, surfaces in Catherine Murphy's "Harry's Nipple." It's like a physiological transposition of Kenneth Noland or maybe Jasper Johns, in its concentric-circle composition. 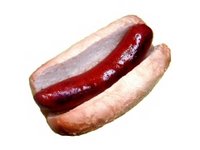 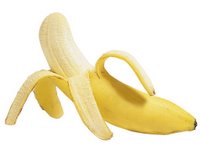 We were excited to find Hilary Harkness' "Matterhorn" (1995). We remember reading recently in the Times about a painting HH made, as revenge for a harsh critique delivered by mathy Mel Bochner in their days together at that one school in New Haven (rhymes with "sale!"). And here it is: MB getting buggered by a she-bull with a strap-on. 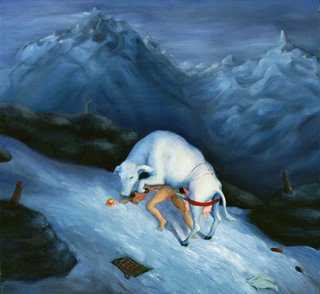 Our favorite in show is the Clare Rojas construction. 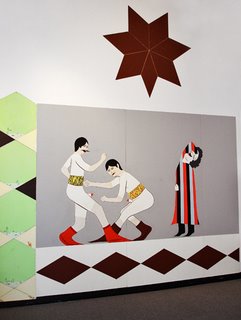 Last summer, the TD crew was privy to one of Jerry Saltz' lectures at SVA.

He described how "the paradigm had shifted." "The boys in black are back," he said, and cited the Barbara Gladstone show, "Bridge Freezes Before Road." This includes Dan Colen, Dash Snow, and then Adam McEwen, Aaron Young, and Banks Violette. These artists crossed paths frequently thereafter in shows at Nicole Klagsbrun, Perry Rubenstein, Bartolami Dayan, and Deitch Projects, and also the last two Biennials, and earned the favor of David Rimanelli.

We think the boys in black are those JS bemoans in "Reconstruction Zone," his recent review for the Voice. In that article, he describes in an unwelcome tone the testosterone/nihilism/post-adolescent/punk aesthetic. This seems to correspond to the "boys in black" idea.

In 2004, JS wrote about "termite art," catching that paradigm before its peak. In 2005, he forecast the "boys/black" movement. So we wonder if he casts the "Riederer Reconstruction" (RR) as a new paradigm. (And we wonder if we are accurately retracing his steps.) One hint may be the "Dereconstruction" show upcoming at Gladstone (the paradigm place?), curated by Matthew Higgs.

Some of the terms in "Recon. Zone" sound familiar: "Painstakingly reassembled all the fragments" reminds me of "labor-intensive," "obsessiveness," and "gestures, bits, and pieces;" from the "California Earthquakes" (2004) review. But maybe the painstaking/fragments dimension is secondary - not intrinsic - to the mission of reconstruction. Moreover, it's significant how RR chooses reconstruction, while termite art undermines and destroys.

Nicole Eisenman is a painter's painter, with many enthusiastic fans in NYC. Her new murals at Leo Koenig, Inc. examine the tumultous creative process, a life in art, and a dialogue with feminism. A series of intimately-scaled portraits add more autobiography to the show. The murals are entitled Progress: Real and Imagined, which expresses uncertainty about forward movement. 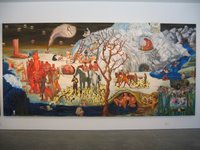 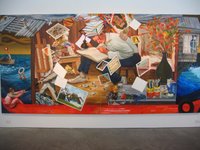 Eisenman depicts "Real" progress in the left panel, where an androgynous artist scribbles with a plume into a large sketchbook. The artist is hunched over, face nearly pressed to the page, with "his" legs sprawled. He is surrounded by painting accoutrements - Bustelo cans, Turpenoid, and jars of mediums - and a "real" palette sits in the foreground, with thick, crusty gobs of paint on the canvas' surface.

Between the painter's Converse sneakers, we find a shattered lightbulb: a busted idea. Loose pages drift around. Are they unfinished drawings, memorabilia, or passing influences? Between the broken bulb and loose pages, we sense the transience of ideas, that they can be adopted or discarded quickly.

Either way, the artist here is in distress, drawing his way out of a sinking ship. In the distance, an Icarus figure grasps a life preserver and in the foreground, a man tries to pull his mate back on board. If the crew of the Medusa could have been saved by an earnest painter, this hero(ine) would be the one. Despite the near-disaster, the artist continues to work, displaying commitment and perseverance. The painting says, "Hard work is a virtue" or "Where there's a will, there's a way." Or maybe it describes the ways that painting can consume the artist, making him oblivious to the surrounding world, placing him into the realm of his imagination.

Progess "Imagined," according to the same painter's vision, unfolds in the other panel, a frozen landscape inhabited by Amazons developing an agricultural/economical system that appears to be based on artificial insemination. Gangs of women port around the testicles of a slaughtered, giant male whose head rests in the open. Some women carry rifles; others ride horses and supervise hunting dogs. Eisenman has used glacierscapes in the past, as in "Sloppy Joe Party" (2000), "The U.S.S. Williamsburg Crashing into the Shores of Fame" (2003), and the "Mining" paintings (2005). These pastoral scenes indicate a utopia, where people follow natural ideals and live off the land - Rousseau, Gauguin, etc. But Eisenman's utopia is frozen, and therefore, infertile. A tree grows in "Imagined," but it is barren. Thus, Eisenman's lesbian utopia is almost uninhabitable. 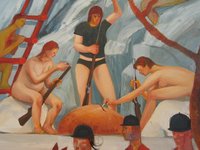 In "Imagined," we see more of Eisenman's personal iconography. In a cave, a figure resembling the Fantastic Four's "Thing" sadly reviews a letter. A similar figure appeared in "From Success to Obscurity" (2003). This self-critical melancholy is assuaged by humor. In the cave above, a vagina-headed figure pets a phallic-shaped cat. Above that is a cartoon drawing of a bulldyke with tits and three penises, saying "There's Some for Everybody." A Bergman reference pops up in a nearby game between a woman and death - they are playing "Sorry." Here, the "game" is maybe a pun on the game that women hunt - men. Death sits with his legs crossed and head resting in hands, a pose Eisenman has used in numerous previous paintings to indicate observation or dejection. Death may be losing this game. 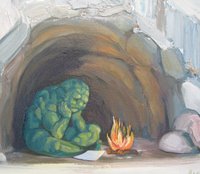 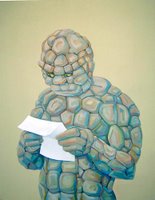 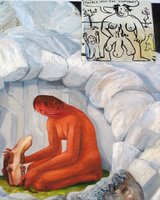 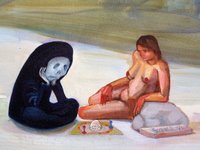 "Progress: Real and Imagined" is a diptych, essentially. It features an ambiguously gendered, but apparently male, artist generating an imaginary land. In this land, men are compromised, reduced to currency - only useful for survival, merely necessary. They are like nutrients or shoes. However, the artist conceiving this world is apparently male. As a creator, he masters this universe and reigns supreme. Yet, he is still created; created by a female artist, who is making a painting about making a painting, and who is aware of her power as a painter. 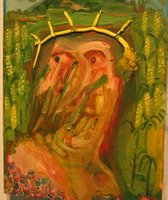