The TD crew wonders what's with the broken glass. We recall how deer were en vogue two years ago, all over printed t-shirts, graphic design, and even painting. Now broken glass is taking over.

We first noticed Rob Pruitt's glitter-on-canvas painting, "Cocaine," in the group show at Paul Kasmin. This painting looks like shattered glass (or a spider web).

Then we noticed Josephine Meckseper's broken mirror in the group show at Andrew Kreps.

Of course, Barry Le Va's shattered glass is a highlight in the Whitney's "Full House" show. Oh, and the "Bride Stripped Bare" is another predecessor, albeit accidentally. 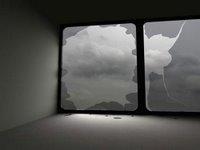 What does this mean? Art as menace? Degeneration of morality? Destabilization of the picture plane?

At the opening of "Into Me/Out of Me" at PS1, we got a hearty laugh out of Tom Friedman's "Untitled," a sculpture consisting of a flea-sized piece of poop atop a pedestal. Nearby was Manzoni's can of shit, and surrounding were John Miller's phallic stool, a Warhol piss piece, and other excrement-engaged art.

We returned last weekend to review the show, and noticed that the dung disappeared, the feces fled. Pedestula rasa.

We thought about a show we read about, in which Brancusi's pedestals were the focus.

A security guard shrugged when we told her about the shuffled shit, and then walked away. The receptionists were more receptive, and one joked that now it was Friedman's "Curse" piece.