Did we already mention that we are doing a studio residency program? Well, we are. Last night was the "mixer" that brought us together with artists in other NYC residency programs. We ran into curator Geir Haraldseth, from Oslo, who recently graduated from Bard's Center for Curatorial Studies. He told us about the book he's writing on art and music collectives. We also stumbled into the studio of someone named Aaron Johnson, who was making big, grotesque paintings that are just plain awful - in a good way. 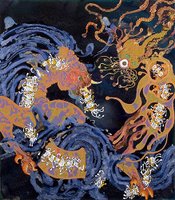 Look at those wacky colors, like mashed berries and potato soup. The octopus tendrils and dripping, oozing forms stir up Steve DiBenedetto and Peter Saul, as if they were painting intestines and mashed up food. There's a "decorative grotesque" at work, like Chris Ofili, and the frequent use of patterns invoke an op-art contingency; so Aaron Johnson is like Bridget Riley taking acid, meth, and testosterone simultaneously. The acrylic pigments stick to translucent vinyl stretched just like canvas, so the pictures kind of float in their frames. We didn't get to meet him, nor Alison Elizabeth Taylor, whose studio was mostly empty, because she has a show at James Cohan, but we wanted to. So if you see them, please say hello for us.