Can artists really respond to supernatural, occult, or extraterrestrial topics? Isn't earth-bound material enough?
John McCracken's mirrored planks relate to extraterrestrial life. "I do try to make things that look like they come from somewhere else-from a UFO or a futuristic environment or another dimension," he says. 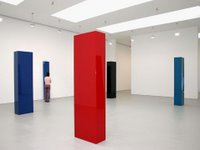 Ian Cooper, in a 2005 show at CUE Foundation, incorporated E.T. and Elliott's machine for phoning home.

And Budd Hopkins compromised his career as an AbEx painter by becoming a leading researcher and spokesperson for UFO research. On the profundity of extraterrstrial life, he says, "On the most profound level, it means that an intelligence which is a controlling intelligence, which can see into our mind, so to speak, which would mean a total end to the privacy that we each have inside our heads right now." Of course, we don't need aliens for that - we just need President Bush to keep at it. 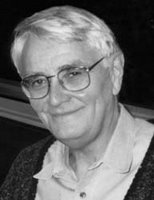 But how about the occult? Of course, there's Tom Friedman's "Curse," a spherical curse placed eleven inches above a white pedestal. And the recent Creative Time show, "Strange Powers," included art "made to actually have a paranormal effect on the world, including spells, talismanic objects, and apparitions conjured and transcribed."

We know Kandinsky responded to music, but he also made paintings related to theosophy. So did Kupka, Mondrian, and Malevich. Supposedly. One teacher at SVA told us that these painters developed palettes inspired by human auras. We think Mondrian had more reductive, formal concerns, however, with his management of primary colors. And remember that "3x Abstraction" show at Drawing Center? Those drawings with spiritual purpose?

But if we take theosophy as a religion, or at least some "faith," then we also have to think about Christian, Muslim, and Buddhist art. Then it's no big deal to have "theosophist art" because faith-inspired art fills history books about art and architecture.

Skeptical pragmatists that we are, the TD crew welcomes these interpretations only in our earnest purpose of learning more about the artists. But we kind of chuckle to ourselves about all the ghost and alien stuff.