Jesse Bercowetz and Matt Bua accumulate and assemble ramshackle, jheririgged structures from detritus. They are grotesque, awkward, and loaded with meaning.

Supporting these wretched arrangements are complex channels of history, conspiracy theory, and myth; and the architectural sites at which these narratives surface. For example, in "Can Jet Fuel Melt Steel?" a bowling ball perched atop a towering web of wooden skewers conveys skepticism about the collapsed World Trade Center towers. "Architectural Additions" hosts images, text, and an audio recording of David Nash, who tried to "occupy" Governor's Island for his imaginary, one-person political party. Nash sounds rational, if undereducated, and aware of the apparent craziness of his act - yet still convinced of its validity. Our analyst friend jokes, "The Neurotic builds castles in the sky; the Psychotic lives in them." Nash's theory about "king genes" is accompanied by a jingle about "king jeans." 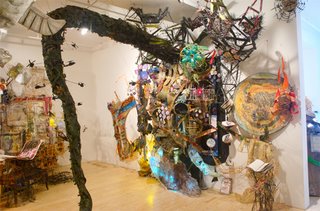 Accumulation is the key to their process. The artists must have spent months in research: looking, absorbing, collecting, and filing information. Likewise, the range of materials involved suggests that they spent months (or years) combing through rubbish, storing it, and fishing it out later. There is a 1:1 ratio between research and materials. So "Raising the Dead," about Lazarus and sunken ships, is about itself as much as other things. The artists have resurrected discarded and forgotten objects - and ideas.

Another key is exposure. Like the conspiracies and myths exposed by their tellers, each structure's construction is fully exposed - trails of hot glue are as prominent as the kebab skewers they connect. Extension cords pile up. Nothing is hidden.

Formally, the artists fit (jam) into the "Clusterfuck Esthetic" coined by Jerry Saltz. And their typically male interest in history and conspiracy theory rounds up typically male-dominated legends. And how many men does it take to change a Bercowetz/Bua show? Still, their low-tech, pothead rubbish retreats from high-production clutterers like Mike Kelley and Jason Rhoades, and from architectural artists like Sarah Sze. In fact, they are the anti-Sze, because of their chaotic and anarchitectural structures, more like rusty exoskeletons than space-station map-o-zoids. Jon Kessler flaunted the kling-klang buzz and hum of thousands of TVs and miles of wires in his PS1 superproject, but Bercowetz/Bua use sound for interviews and music, viewer-activated via timer dials and played on second-hand boomboxes. "To Fry or Fly" is different - it's an overstimulation chamber in which the user can turn on a cacophony of senses-shattering alarms, like Jim Carrey's most annoying sounds in the world. Our sympathy to the gallery staff! 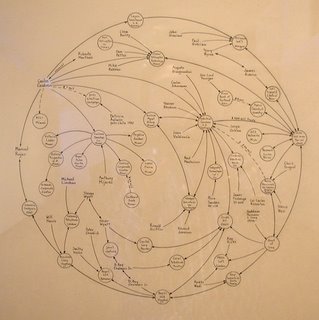 The late (offed?) Mark Lombardi designed dizzying maps of intercontinental exhanges and in-bed-with-the-devil partnerships including Western millionaires, the mob, Arab tycoons, and more - often exposing the market-driven, selective disapproval of terrorist funding. His text-based maps are modest as objects though abundant as carriers of information, owed to years of obsessive research. Lombardi splices the clues, editing indices of unlikely relationships. Bercowetz and Bua spend more time on a few individual events, and likewise spend more time on their complex structures. They are less like detectives, and more like curious, armchair journalists. But their output is almost masterful.