Rob Pruitt, our great Phoenix, rose from the ashes of his 1992 Leo Castelli show, when, at 27, he and Walter Early crossed the Mason-Dixon line of Political Correctness with a seemingly racist show. Consequently, NYC exiled him for 7 years. (Looking back, this "misstep" turns out to be prescient and rich, now that Eminem is behind us and Kelley Walker sells racially sensitive work with no problem.) Later, Pruitt got revenge, salvation, and exposure with "Cocaine Buffet," a powder-propelled party and event at another artist's studio. Following that were the solo shows "101 Art Ideas You Can Do Yourself," "Pandas and Bamboo," and many group shows. Panda paintings in the 2004 Biennial cemented his complete comeback. 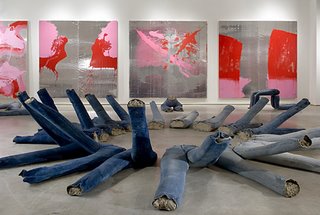 The new show is more Home Depot than Pearl Paint, as Pruitt uses construction materials like poured cement and foil-covered insulation. And he uses repetition in the self-sufficient sculptures, like in the radiating can-can dancers. Construction materials? Repetition? No pedestals? Sounds like minimalism. And it is! But instead of impenetrable, glossy surfaces of steel, his sculptures are crusty concrete and aged denim. They are casual, vernacular, and "slacker," rather than formal, systematic, and "ideologue." They're a cool dude (or chick) chilling on the beach, miles away from an ivory tower and math books, probably snacking on potato chips from a Kevin Landers sculpture. Doubt it? How about "Minimalist Sculpture for My Dad," a sculpture shown last year at Nicole Klagsbrun, which Roberta Smith claimed "contrasts weight and featherweight, butch and femme, with a Juddian plywood box." And it was covered with potato chips!

Minimalism is infamous for its macho rigidity and austerity. And so is AbEx painting, another theme addressed by Pruitt. He's taking the most manly methods and castrating them. Vintage denim is often sold unisex, and anyway, these legs are gender-free. And the paintings are almost Liberace, dressed in flamboyant pink and dazzling silver. Mixing glitter into the paint crystallizes how gay these paintings really are; this is magnified by their large scale. Using the mural proportions of AbEx painting and its broad, bold gestures, Pruitt simultaneously subverts that school of painting. With the gauche glitter and puffed-up palette, the entire thing becomes a gaudy disaster, mocking the self-important pretenses of action painting. 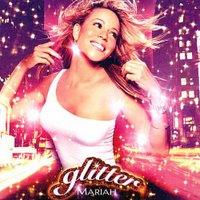 The sculptures allude to the body, as well. One knows by looking that the cement is heavy, which emphasizes the weight of these sculptures. They aren't just space. They would make an impression in your bed. Felix Gonzalez-Torres also tuned into the importance of weight; some of his candy sculptures were amassed according to the weight of Ross, his lover and inspiration. Pruitt's viewers will ride the jeans to a place where the sculptures seem to have personality, self, and familiarity. Everyone owns jeans, and probably does fun things in them on the weekend. Warhol spoke of Levi's 501s as the perfect attire for a young person.

Some of these materials also stir up Pruitt's own history. He used denim in some early work with Early, and he may have picked up the insulation idea while customizing his headlining house upstate, also a topic in a 2003 show. 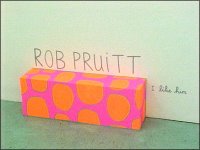 they'd look dope on a wall, but unfortunately they were also incredibly shallow.the sculptures were more interesting and had more soul, as is usually the case with Rob.

Maybe they were shallow on purpose, though - does that justify it? Like, maybe they are "about" shallowness? Anyway, we agree: sculptures were stronger and more memorable.

obviously they were shallow on purpose, much of his art is. If i want to be enchanted by shimmering disaffectedness, then they work. But at the end of the day they do kind of make me sad, even though I hate to reveal being such a weakling. His panda series was so immobilizingly front and center that emotion never came into play with work like that, other than elation;; stuff like the evian sculpture really seem lovable through and through, however. Do you have any idea where one can find images from the castelli show?

anon, we have been searching for those images; no luck. Maybe the exile following that show is more forgiving for Pruitt than for the images of that work. Michael Kimmelman described it: http://query.nytimes.com/gst/fullpage.html?res=9E0CE0D6113DF933A25752C0A964958260

We were intially hostile to and dismayed by this show's glib, flashy, and shallow appearance. But then we got distracted by researching his earlier work.

I was struck by the “importance of weight” connection you made between Pruitt and Gonzalez-Torres. Somehow, though, recalling the brilliance in Torres’ simplicity and depth, the pure aesthetic profundity, only points out the near pointlessness of the Pruitt. I’ve tried to see them as artistic commentary, that perhaps the weight provides a tension between heavy static material and the kinetic gesture, pointing out the effort of the chorus line. Blah, blah, and so what? The Torres has an emotional resonance, a humanity that can stay with you. Weight becomes a symbol and a fact, a hope and a lost hope. He encouraged his viewers to physically take away from it, to give it life and mortality, allowing us to have a playful, physical, and conceptual relationship with something profoundly personal and sad. The idea itself is FULL of meaning, not just aesthetic smartness.

Why does nothing seem to go that deep these days? Does Pruitt even come close? I’m sick of purposeful detachment. It’s a defense mechanism for the shallow.

Complex issues. First, hopefully, we didn't banalize Felix G-T in comparing him to RP. Just observing how they emphasize mass in an "extramaterial" way.

You're right about the symbol/fact//hope/lost hope dialectic and how his candy sculptures satisfy sentimental, emotional needs without compromising conceptual rigor. Simultaneously pragmatic and poetic, stimulating for the mind and heart.

Maybe the temporary totalitarian reign of Conceptual Art - cerebral, logical, mathematical - set up a precedent against emotion in art, while trying to combat the fetishized, marketable art object. So artists ignored things like lost love; or, art criticism ignored the artist who did not ignore these things. So, Mirth fell to Wit, Thoughtfulness to Cleverness, Relationships to Equations, and Pain to Something else (the Abject?). Maybe we're still in that spell, prolonged by shiny pop, neo-geo, etc.

Meanwhile, what made Felix G-T's work desirable in that context? Did the urgency of AIDs elevate his political practice? Was it just a cyclical trend, the wheel of fortune spinning in his favor?

I keep hoping we’re past the hegemony of Conceptual Art. Or at least past that which allows an incestuous and purely logical expansion of “art” ideas to be confused with sincere and human artistic insight. Yes, that those candy sculptures can be easily understood as more than a pile of candy is thankfully owed to the doors they opened. And surely there are other examples before and after where the Conceptual mind works in conjunction with the heart, not only in dealing with AIDS and lost love. Why then, after such evolution, are the empty mannerisms of “Concept” put up with?

In “trying to combat the fetishized, marketable art object”, the conversation is stripped of sentiment. Through this, however, it is further stripped of emotionally accessible artistic experience, sidelining artists who see in their medium a mode of exploring challenging existential ideas. I would suggest that this “anti-sentiment” Art World is instead a Pro-Corporate place, knowing full well that large, obscured, near meaningless shapes work great in Corporate Collections. Logical, faceless, heartless; shallow = safe, shallow idea + intelligent spin = sales. An idea with real depth or emotional resonance would be far to challenging. Corporations obviously aren’t looking to stimulate the heart of their workers, so why should the art… right? It’s a problem of our society. That strong branding of over simple ideas can mask that shallowness is no surprise, i.e. Big Tobacco, McDonalds, Coca Cola, etc. Worse is our inability to decipher artistic success from financial success. If a show sells out for millions it must be good, never mind the fact it is merely providing expensive decoration to soulless, money hungry institutions (or the men who own them).

You listed some very good examples of artists going beyond this, searching both inside and out. Art doesn’t get much more personal than AA Bronson’s butt massage healing. I found it interesting to look back at Ken Johnson’s NYT review of Sophie Calle’s Exquisite Pain.
http://query.nytimes.com/gst/fullpage.html?res=9C02E1DF1139F934A15756C0A9639C8B63&sec=&pagewanted=print

“That may be the most poignant thing about her show: seeing how her head compulsively overrides her heart.”

Perhaps the most poignant thing about that review is that the heart is even seriously considered. That her “head compulsively overrides her heart”…I’d be insulted… I think? Critique or compliment? Either way, at least she’s attempting to use both.

The way you expose the market-driven goals of supposedly anti-market art is clever and eye-opening.

But just to be fair: art that is low on concept and high on emotion or materiality or decorativity can also be guilty of pandering to corporate collections or philistine values. You know, lots of people (like in Nebraska) still believe the stereotype of art and artists being romantic, emotional, impoverished, and maybe sort of misanthropic and won't accept anything else.* Some art is too challenging for them ("You call that art?"), but that helps all of us because it excavates new territories (or at least introduces new stereotypes). Like, the Vietnam Memorial in D.C. was a political Red Sea and lots of Republicans fought to suppress Maya Lin. Just too cerebral, soft-spoken, and cool - and undemocratic! Hence, the illustrative, dumbed-down, figurative statues to counteract her efforts.

Anyway, your point suffices: the lofty ideas (pretenses?) of conceptual art can easily be sold out, so we should be skeptical about those incestuous, intellectualized (calculated?) schemes.

*This is like white boys listening to gangsta rap because it reinforces their media-induced, stereotypical ideas about Black men. And record labels capitalize on this.

hope they post rob on paintersnyc just for the convo