The TD crew is a hung jury on Dash Snow's show at Rivington Arms. 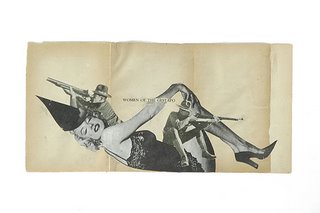 The assemblages are almost formless. Snow continues his book installations, first unveiled at the Whitney Biennial. The used paperbacks, about psychopaths, serial killers, satan-worshippers, and weirdos, are stacked in the back room as walls of a fort, with a blanket canopy hanging above. He's also used books as pedestals for vitrines containing more objects, and then there's the glass-covered box with hypodermic needles, boner-shaped lighters, knives, cigarette butts, and prescription medicine bottles (also recently used by Sarah Sze and Jean Shin). It's kind of like snooping in the desk drawer of a white-trash meth addict (or maker) and you can imagine him making a list of these transgressive trinkets.

Snow seems the anti-kitsch; everything is gross and rotting and severely wounded. But then it's all so easy and obvious, it becomes its own variety of kitsch. Thomas Hirschhorn's use of bullet-ridden bodies seems far more terrifying and poignant.

So what does it all mean? Snow fixates on and aggressively thrusts forward an underground/underbelly/viceland of sex and drugs and misanthropy, a world available only by the black market, dark alleys, and knowing where to look. Does the new work function like his Polaroids, as ambassadorial reportage from the fronts of drug-fueled parties and vandalism? Or is he simply searching out and pasting together shocking content, no better than Marilyn Manson? And how do we equate the bin Laden and Hitler imagery with the far less destructive drugs, guns, and porn? Or is this a critique of Bush's America, abrasive and aggressive only because it's, like, really frustrated?

We raise the questions but also hesitate because Dash Snow is a scenester. Here is Ryan McGinley's photo, "Dash Cutting Up Lines," and Dash Snow's response, a Polaroid of RMcG blowing lines off of a flaccid dick: 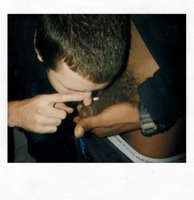 All three are friends, the new loisaida school, though its all pr and rehash. They are nice guys and quite dedicated, though none of them the sharpest pencil in the box... Dash and Mary-Kate Olsen are dating- they deserve each other.

Anyway, thanks for the Olsen twin gossip. Gross!

I dont mind dash's stuff. Ryan--you almsot have to be an anti-vice mag artist on principle but alas he does take beautiful photos .cant lie

Dash Snow aka Max Snow? Funny but also no.

Thanks, Open heimmerrrrrrrrrr. Dakota sounds like a score. Can you hook us up? It's been kind of a dry spell for us.