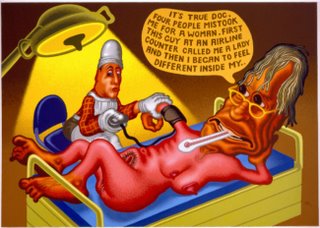 The TD crew recalled a panel discussion with Peter Saul and Jim Nutt at Parsons last year, moderated by David Sandlin. Jim Nutt spoke measuredly and softly. Peter Saul, on the other hand, ranted and bellowed, chasing tangents and digressions. Apollonian Nutt was soft-spoken, offering placid reflections on his work, while Dionysian Saul was a rambunctious raconteur. Laughing, we couldn’t tell if he was serious, or just putting us on. Either way, he was hilarious, and seeing him made us like his work more.

Saul’s new work at Leo Koenig, Inc. proves us right about liking his work more and wrong about the Dionysian thing. The surfaces are smooth and unfettered and not gestural or frenetic. Controlled, planned, and dappled layers model his grotesque figures, and localized sheen on some darker colors proves the care with which he paints. He is crazy, but he’s a crazy craftsman. 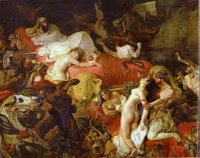 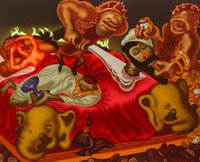 Typically heavy-handed, Saul takes on President Bush, relations with Islam, and identity crisis. "Sardanapalus" reworks the Delacroix masterpiece and conveys our perception of Islam as brutal, bad with women, and eventually self-destructive - all we need now is a portrait of Pope Benedict reading medieval texts. In "Bush at Abu Ghraib," the President grins next to a head turned to cottage cheese by bullets. And in "Self Portrait as a Woman," Saul's gender identity crisis reminds us of our rapidly improving awareness of men, women and those in between, and the roles they play. In the end, Saul proposes that interpersonal conflicts cause permanent changes, usually morbid, violent, and freakish. Saul’s existential commentary isn't forlorn or hopeless, however, and instead takes on an attitude of raucous self-deprecation and absurdity. 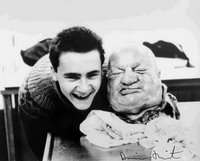 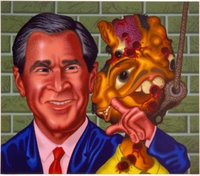 Comments:
graigs ships come in, and ellen is looking quite smarmy, this jock, this jock

i loved liz murray's look with the hat, I'll be there soon. hang on my dear. (stop ringin that fuckin bell! bticj