Jacqueline Humphries must hang out with Christopher Wool and his wife, Charlene von Heyl. The influence is obvious. Here is the tape that von Heyl flashed in her recent show at Petzel, along with the scrubbed, unpainted style that von Heyl swaps with Wool.

Charlene von Heyl pioneers gestural abstration, (aka AbEx), albeit atmospheric, slick, and programmatic; instead of heavy, crusty, and spontaneous. Although her paintings document a decision-making process - a record of thought - they also expose an architectural, plan-driven mode of thinking - appetitive but distilled. This is evident in the use of tape, because one can't apply tape in a gesture. Materially speaking, it takes a few minutes of care and measurement. Intellectually speaking, the voids left by the taped areas interrupt the gestural areas, revealing a sensibility that contests the primacy of gesture. 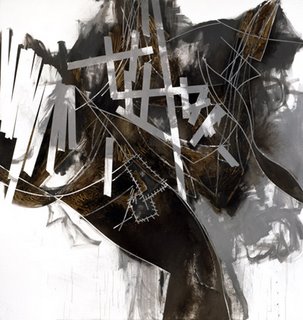 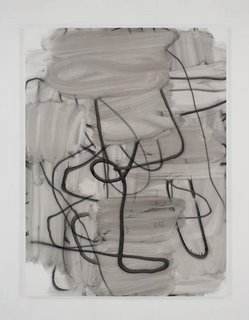 Christopher Wool's spray-painted abstraction is both renegade and ascetic, like a noir hitman bachelor of few words, or even Batman. Pared down to black and white, he withholds from himself and the viewer the sensual possibilities of painting: no emotive color, no bravado brushwork, no bold/audacious/libidinal/fucking rock star painting. Just spray paint, the tool of the graffiti artist, and drips or scrapes - which he uses more like litter or leftovers than Pollock-ian action. Wool's paintings are pared-down and nihilistic, aware of decline and degeneration.

While Wool brings home the bacon, von Heyl wears the painter's pants in the family. But both have vowed to challenge the gesture. CvH does it by negation, by physically interrupting the gestural stroke with non-gesturally applied tape and the consequent voids of action. Wool does it by revising the gesture as vandalistic and stoic, instead of romantic, action-packed, or pastorally sublime. Isolating and reimagining the gesture in order to review it, positively or negatively, is part of Rauschenberg's seminal "Factum I/II" diptych, Lichtenstein's frozen brushstroke sculptures, Siskind's "Homage to Franz Kline," Serra's cross-medium "Molten Lead" toss, Ann Craven's Bambi reincarnations, Warhol's impersonal grounds for divorcees, Richard Aldrich's scrutinized scribbles, and many others. Part of the subject matter are the appearance of and connotations of the Good Old American (or European) Gesture, which is supposedly spontaneous, willful, immediate, direct, and ungoverned. 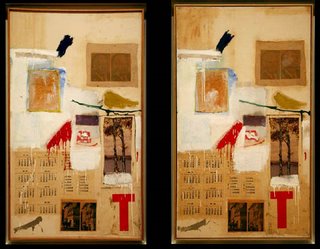 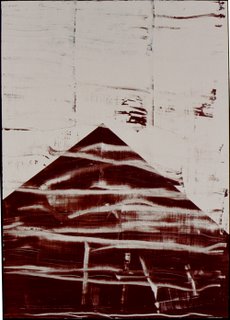 So Jacqueline Humphries produces for her show at the excellent Greene Naftali gestural, scrubbed, taped abstractions in silver, even with some spraypaint. Hot off the series of "black light" paintings seen in New York at Nyehaus and Elizabeth Dee, JH continues to challenge the sufficiency of paint on canvas to transport the viewer and therefore, submits her palette and surface to unusual optical effects. The silver glistens and competes with the other colors. From ground to surface to material to subject, the silver dances and prances while bedazzling you to overstimulation. 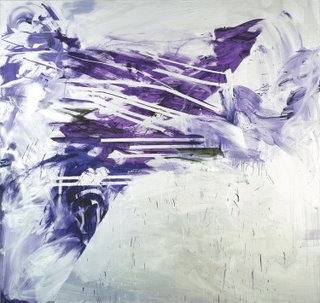 These paintings are kinky, raunchy, and gauche. Imagine Marilyn Minter gone nonrepresentational. These works listen to Motley Crue, fuck you in fishnets, claw you with their black polished nails, and put out cigarettes on your nightstand. They would go down on you in the theater. The paint is slathered on, then scraped, scrubbed, and scratched in a fury. It pools in excessive puddles, then drips away, leaving eroded layers behind. Meditative restraint and sparse economy, employed by Joan Mitchell, have no place here. We're closer to Cecily Brown's libidinal relentlessness, where every inch of canvas seems battered. Yet that relentlessness is unlike the early AbEx painting, which was driven by an urgency netted by the subconscious flow. These are mannered and stylized. The masking tape masks, but with frequently irregular tapering and imprecise, leaking seams. So while the tape regulates, it is still a little reckless. Like a conspiring chaperone. 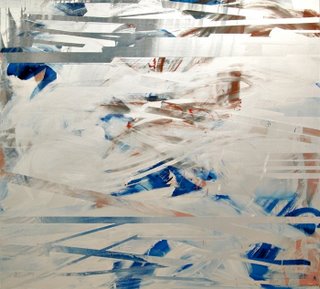 Comments:
Thanks to Greene Naftali for the JH images.

fuk i missed this show

kikstart my heart. Yeah. If this is the direction art writing is going in, count me in. Maybe Ill drop the false bravado and go make a painting.