So what do you think of this new Artforum cover? 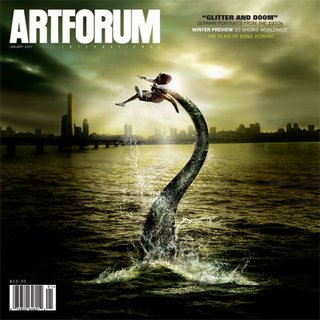 The TD crew finds it strange that AF's cover is the press/publicity/poster image for Bong Joon-Ho's film "The Host." ("The Host," a disaster/monster film, is the highest grossing film ever in Korean cinema, and will open in NYC in March. Gary Indiana wrote a bit about Joon-Ho in this issue.) Why a big movie, and why a poster image?

So let's just pretend for a minute that AF isn't already a portfolio of ads, and actually carries significant, informative art writing. Of course, it does do that, but try ripping out all the ads and see what happens.

Then its use of a press image for its cover just makes Artforum look like a participant in the publicity machine of "The Host!" Just like "Vogue" putting Julianne Moore on the cover when she has a new movie coming out? ("Don't you just love her?" "Yes, and she looks great!") 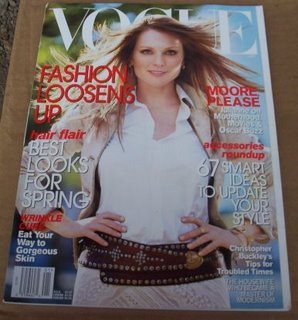 Apparently, AF considers "The Host" to be so culturally compelling that it deserves front-cover honors. So this relation between "The Host" and AF doesn't reduce AF to a publicity rag; instead AF elevates a popular culture event to the realm of art, where sophisticated discourse is appropriate.

But why not use a production still or frame enlargement, as in the "Zidane" cover? That would be like using a detail of a painting, as in the Brice Marden cover. It must be the case that the poster image carries a special meaning that a frame enlargement would not. We think it's because "The Host" is an meta- and mega-spectacle. Its form is a big-money cinema sensation. Its content is a disaster story. So with all this spectacularity, its whole is more important than its parts and the press poster is like a token or icon of that whole.

Comments:
3 you are hilarious. I will have my answer in the morning.

heat of the moment

Thanks, Zip. When we compose a score for our forum here, we'll contact our new go-to guy.