The Triple Diesel crew quit working 9-5 and now commits to the studio, which leaves a) little time for blogging and b) unreliable access to computers. However, the posse managed to catch a few shows this week.

First, TD caught Ryan Steadman at envoy gallery. On panel, the paintings feature precisely ruled "spaces" in enamel paint, rigid in geometry and loose in specificity. They look like chess boards or pixellationsville, with mushy impasto figures falling or moving to indicate which way is up. Otherwise, these are more like theoretical spaces, unburdened by such specifics as clues to "exterior" or "interior," although one features figures falling from a building. Some polygon "squares" have been knocked from the grid, producing a trompe l'oeil effect of holes in the picture plane. Steadman seems interested in Modernist questions of the depth of picture space and its untenable position as a window. 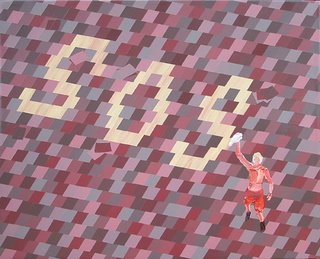 The patron saint here is Il Canaletto, whose Venetian vistas vanish to a perspective point, aligning lavishly detailed architecture to uncompromising visual principles. The figures in his paintings, however, are usually little more than a daub and swab of orange paint on a dark scribble, more like anomalies in a geometrical matrix, functioning only to catch sunlight. Not that we are a scholar; this is just what we've observed.

Ian Davis is next door at Leslie Tonkonow, and sort of offers the same ideas as Ryan Steadman - figures moving through geometrical landscapes. Davis repeats the figures, distributing them in rows, columns, lines, and concentric circles. Most of them are redcoat soldiers, U.N. officers, or high society players - either way, their "uniformity" comes through in their "uniforms." As in some Minimalist art, he builds his pictures using primary units: but instead of a silver cube or white sphere, he uses a WASPy man who varies from his peers only in his density of hair. Unlike Steadman, Davis seems to have fun dwelling on trees, chairs, architecture, and more sophisticated perspectival tricks - a more thoroughgoing examination of geometry.

Comments:
all victims of disconnect

I appreciate these reviews but something about the writing style seems didactic and "holier than thou" in a strange way.

Thanks, anon. We think of them more like "responses" than "reviews." Def. not intended to be holier than thou; we are the biggest morons we know; we just like talking about art.

is this your work? This seems to be the only 9-11 referencing work yet that could stand on its on. I think Roberta might like these(that last sentence was cheesy)

No, but we wish it could be our work. We tried to contact Ian Davis via the gallery. No response.

If you could be any artist, whom would you be?

Hey Triple Diesel,
Thanks for not ripping me 400 new *ssholes like the gang over on painternyc. And thanks for posting me. I loved the Ian Davis show. It was somewhere btwn J. de Balincourt (see 'The Watchtower', 2005) and Matthew Fisher's continental soldiers; with a minimalist hand. The size of them seemed really right on too.
Take care,
Ryan